The first European explorers noticed important of iron ore deposits in the area of Trois-Rivières. In 1730, François Poulin de Francheville, seigneur of St. Maurice, was granted the right to mine and trade the resource. The blast furnace was built in 1738, launching America’s first iron industry: the Forges du Saint-Maurice. The company manufactured all sorts of things: skillets, pots, kettles, anvils, hammers, guns, cannonballs, railroad tracks... As Canada’s first industrial village, the Forges du Saint-Maurice had a significant impact on the region’s growth. The blast furnace and two forges remained in activity during 145 years, before shutting down for good in 1883.

During the night of the 7th to the 8th of June 1776, American troops landed near Pointe-du-Lac. Their goal was to take possession of Trois-Rivières, a strategic point between the cities of Québec and Montréal. In the midst of the American American Revolution, the Thirteen Colonies of New-England, precursors of what would become the United-States of America, aimed to make Québec the fourteenth colony.

American soldiers ordered settler Antoine Gauthier to guide them to Trois-Rivières. A shrewd man, he recommended against taking the road that bordered the St. Lawrence River and led them inland, by what is today called the Chemin Sainte-Marguerite. Meanwhile, his wife Marie-Josephte raced to warn the captain of the local militia. When the American troops reached town, they were met by waiting soldiers. The ensuing battle was a short one: Canadian and British forces easily fended off the Bostonian invaders. 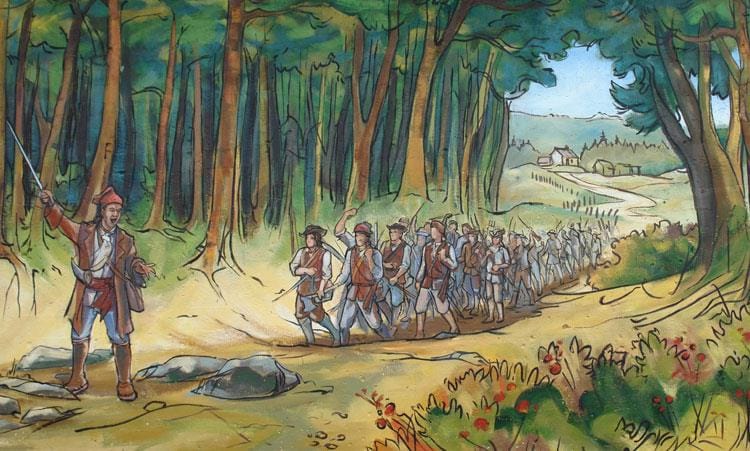 In the colony’s early days, economic activity centered around the fur trade. Because of its location at the confluence of two major waterways – the St. Lawrence and St. Maurice Rivers – Trois-Rivières quickly became an essential crossroads. In fact, the delta was already a meeting and trading place for the Amerindian peoples. The area was then occupied by Montagnais chief Capitanal, a great friend of the French. He requested a dwelling was built on site.

Well aware of the area’s potential, Samuel de Champlain sent the Sieur de Laviolette to establish a permanent fur trading post at the mouth of the St. Maurice River in 1634. When Laviolette had the Trois-Rivières Fort built, it attracted around thirty settlers there. Actually, the first feudal lands had already been conceded to Jacques Hertel and Jean Godefroy de Lintot seven months prior, on December 3rd 1633. Both were interpreters, helping to establish a connection with the local Amerindian population.

A great number of coureur des bois, as fur traders and woodsmen were called, and travelers could be found in Trois-Rivières and in surrounding seignenuries. Their lifestyle mimicked that of the First Nation peoples. Aboard their canoes, they roamed waterways in search of brown gold, beaver pelts. In doing so, they discovered new territories. Among local heroes are names such as Médard Chouart des Groseiller that became legends thanks to their exploration of the Hudson Bay area. Let’s not forget Nicolas Perrot and René Gaultier de Varennes Sieur de La Verendrye, explorers of western Canada. 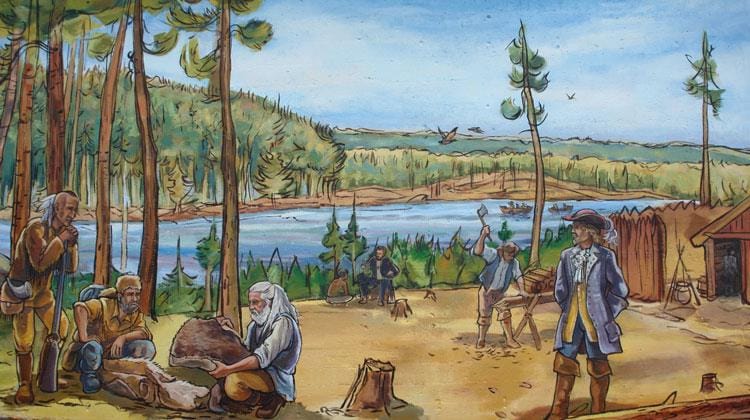 The commercial exploitation of the Maurician forest began at the middle of the 19th century. Two events account for this fact. First, the end of the Forges du Saint-Maurice’s monopoly on the lumber industry opened up the territory to other businessmen. Second, log driving activities were set up on the St. Maurice River. Trois-Rivières’ economy took off like never before. The city prospered thanks to its location at the confluence of two major waterways, which could be used to transport wood and provided an inexpensive energy source. Supported by these conditions, lumber production grew by leaps and bounds. At the turn of the 20th century, five sawmills were operating in Trois-Rivières.Besides the lumber and paper industries, an important ochre deposit stimulated the development of Sainte-Marthe-du-Cap. Formerly called Red Mill, this deposit supplied the Forges du Saint-Maurice. Later, it was used to pigment the paint manufactured by Canada Paint. 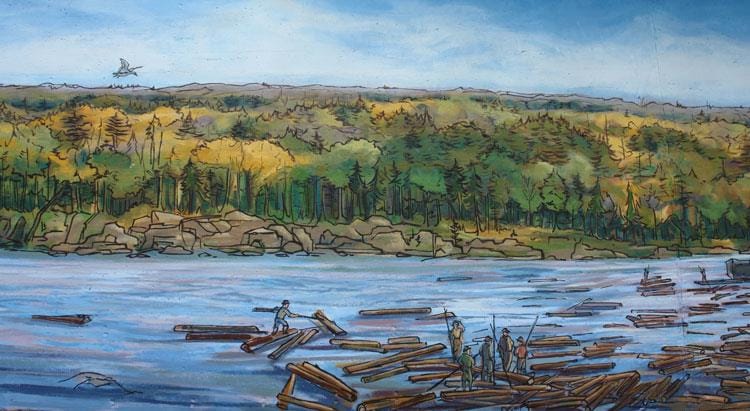 Scene 5 - The pulp and paper industry

The industry then turned towards the paper production, prompted by the swift growth of wide circulation press and the United-States’ important need for newsprint. Trois-Rivières’ first paper mill, the Wayagamack Pulp and Paper Ltd began its operations in 1912. The St. Maurice Pulp and Paper Company followed in 1917, then the Canadian International Paper. At its opening in 1921, it was the most modern paper mill in Canada and the largest newsprint factory in the world. The Three Rivers Pulp and Paper mill was added to the list in 1923. Their combined production awarded Trois-Rivières the title of paper capital of the world. 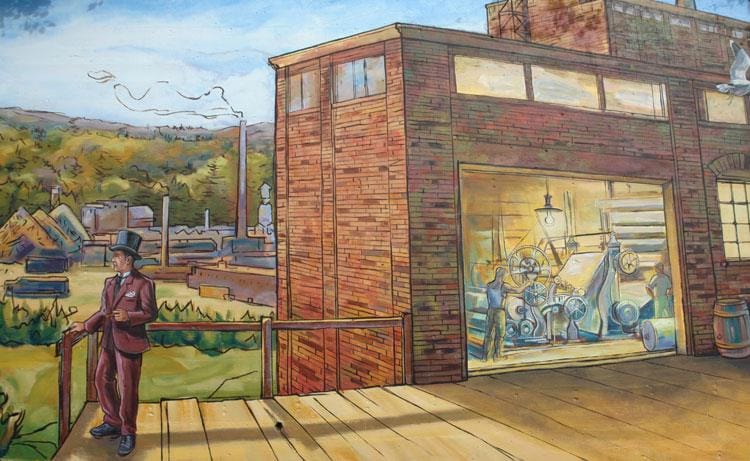 Before the Capitol, the city’s first theatre, was built in 1928, Trifluvians saw movies, plays or concerts at the Académie de La Salle’s or the Séminaire Saint-Joseph’s auditoriums, or at City Hall. In 1978, the city of Trois-Rivières acquired the beautiful Capitol theatre. It was renamed Salle J.-Antonio-Thompson, in honour of the great composer, organist and orchestra conductor that shaped many generations of Trifluvian musicians.

The Maison de la culture was built in 1968, making it one of Canada’s first cultural centres. It was extensively renovated in 2004. With its theatres, museums, art galleries, symphony orchestra, various festivals, performance companies, Trois-Rivières was voted one of Canada’s Cultural Capitals in 2009

As soon as they set foot in Trois-Rivières, in 1697, the Ursulines devoted themselves to the education of young girls, as the community’s mission implied. They taught reading, writing and arithmetic, as well as home economics and manners to White and Amerindian little girls. Their institution, the Collège Marie-de-l’Incarnation, still exists today. Other pioneers in the educational field were the Filles de Jésus, who founded a kindergarten, as well as Keranna high school, teacher’s training college, and Val-Marie domestic science school. Masculine religious communities also played a part in the education of Trifluvian children by creating the Séminaire Saint-Joseph, Collège Laflèche and Académie de La Salle. 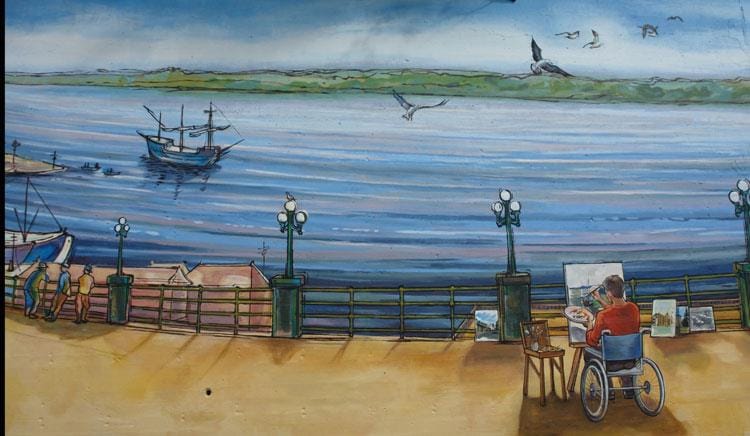 The growth of commerce and of the logging industry during the 19th century encouraged the creation of harbour facilities. Many private developers built their own berthing places to ensure merchandise could easily be transported to their industries. The inauguration of a ferry service in 1847 brought on the construction of the first public dock. When icebreaker boats began operating around 1910, the port was active year round. This innovation allowed maritime transport to rival with railway transportation. 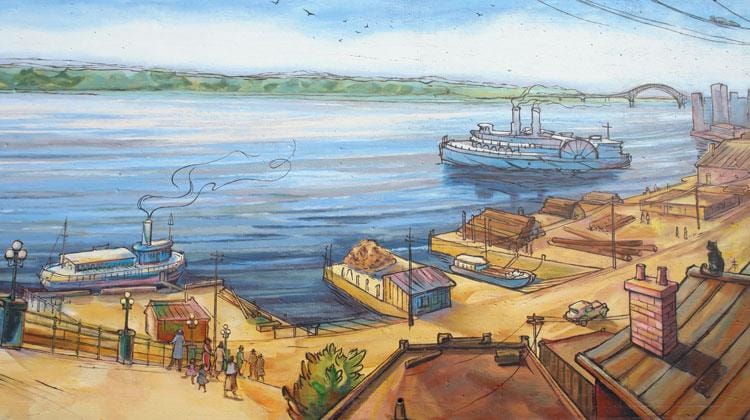 The presence of vendors and customers from Trois-Rivières public markets played a part in the port’s animated atmosphere. The “marché aux denrées”, the population’s main food market, existed as early as the 18th century. First located near the banks of the St. Lawrence River, it moved to des Forges Street in 1803. The modest pavilion was enlarged during a major renovation in 1846. A second story was added to the building. It was used for municipal council meetings and occasional concerts. Public figures riled up the crowd from its balcony. The marketplace was at the core of public life in Trois-Rivières. It was a place of commerce, but also a social, political and cultural hub. The market was entirely destroyed by the great fire of 1908. It was rebuilt the following year, then moved to Saint-Philippe Street in 1961, where it replaced the vast lumber and hay market. A third market, the fish market, also located on the docks, drew crowds. 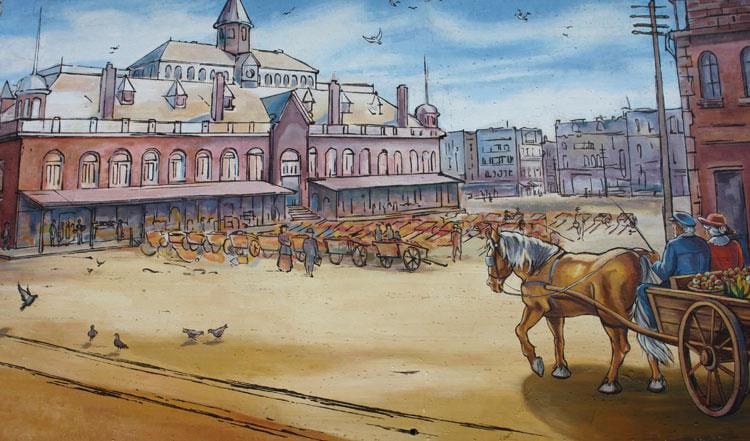 Scene 9 - The downtown area and its businesses

The city’s economy, originating from the fur trade, long relied on the work of craftsmen. For many decades, Trois-Rivières was known for its handmade bark canoes, called rabaskas, which were used to gather and sell pelts. From the second half of the 19th century on, the city gained leather and textile factories, such as the Balcer glove and mitten manufacture (1854) or the Smardon shoe factory (1888).

When the Shawinigan Water and Power was launched in the neighboring town, industries popped up all over thanks to the electrical power it supplied. Among them is Wabasso Cotton, a textile factory founded in 1907. During the same period, the economic activity generated by the prosperous paper mills impacted the city’s growth.

Most of Trois-Rivières’ shops were originally located in the business district, mainly on Notre-Dame, Craig, du Fleuve, Saint-Antoine, and des Forges streets. Remember Gros Marteau, a casting workshop established at the corner of Notre-Dame and Sainte-Élizabeth ? It closed down in 1958, after 131 years of service. When it shut its doors, it was Trois-Rivières’ oldest business.

Many businessmen made their mark on the city’s history, among which Aaron Hart. This first Jew to take up residence in Canada came to Trois-Rivières in 1761. He was a merchant and landowner. His descendants managed many factories and, mainly, a major brewery that rivaled the Montréal Molsons. 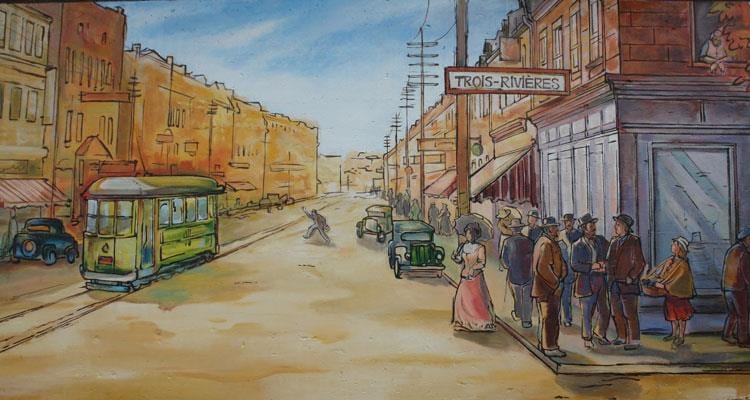 On Monday June 22nd 1908, a raging fire broke out in Trois-Rivières business district. The blaze was started accidentally by two children in a shed at the corner of Saint-Georges and Badeaux streets. It spread quickly and raged on for hours. The fire destroyed a large portion of downtown between du Fleuve, Bonaventure, Champlain and Saint-Georges streets. Champlain Park, as well as other public spaces, became a rallying point for the victims. They piled up their furniture and any personal effects they rescued from the flames, and many spent the night in the park.

The morning after the tragedy, Trifluvians rolled up their sleeves to organize an emergency response. Food supplies, clothing and blankets were handed out to the victims; an emergency fund was created; housing was found. Businesspeople set up makeshift installations near the ruins to supply food and building materials.

Trois-Rivières rose from its ashes in an atmosphere of solidarity and mutual assistance. Keeping spirits up, its inhabitants challenged one another to rebuild in record time and to turn their town into a modern city. In the face of adversity, Trifluvians stick together, like they did on other distressing circumstances: the floods in the Saint-Philippe district (1896), the loss of many citizens in the two wars, the collapsing of Duplessis Bridge (1951), the explosion on the Laviolette Bridge building site (1965) and, more recently, the deflagration in Pointe-du-Lac (2005).

Built around 1780, the Pointe-du-Lac seignorial mill is a jewel of Trois-Rivières’ built heritage. The nearby pond was first used to power the adjacent flour and saw mills, but it was also used to practice different leisure activities. This pond was mostly frequented by amateur sportsmen, but Trois-Rivières’ sports installations were adapted to athletes of all levels.

Winter sports fans will remember ski jumping at the Cap-aux-Corneille, near the St. Maurice River. The 50 meters high wooden ramp was built in 1925 by the Trois-Rivières Ski Club and hosted quite a few competitions. They will also remember the early days of the Curling Club, founded in 1875. And what about the hockey teams that riled up Trifluvian crowds ? Initially, matches of this calibre were played at Laviolette Arena on Sainte-Cécile Street. Starting in 1951, games went on at the coliseum located on the fair grounds. The coliseum was first used as a roller skating rink, before cooling systems were installed. The building, just like the hippodrome and baseball stadium, was built at the end of the 1930s when the agricultural fair grounds were transformed into an amusement park.

Summer sports are not outdone! Trifluvians can enjoy the beautiful site of the Île Saint-Quentin, bought by the city in 1948 to provide a public beach. They can also go for a swim in the fair grounds’ pool, which was America’s largest outdoor pool at the time of its construction.